It’s one of the most memorable moments from 9/11: White House Chief of Staff Andy Card walks up to President George W. Bush and whispers in his ear: “A second plane has hit the second tower. America is under attack.”

The place was Emma E. Booker Elementary School in Sarasota, Florida. Sitting in front of the President were sixteen school children, all 6-7 years old. They were chosen because they were some of the best readers in their school and Emma E. Booker was a success story, test scores were up compared to other schools in the district. It was the perfect place for Bush to promote his education program, No Child Left Behind.

While the President processed the shocking news, the kids read from the book The Pet Goat. The imagery is surreal to watch, even today. An American President on camera at the exact moment he learns of a major attack on the country. Members of the press and Bush’s advisors stand nearby, shifting nervously and waiting. The kids keep reading; their voices are strong and full of hope. It’s like history is on pause. These are the final moments of innocence, right before the storm.

What happened to those kids? Which ones went on to graduate college and get a good job? Who fell on hard times and why? We’ve tracked them down to find out what they remember, what’s happened since, and their dreams for the future.

Eighteen years later, they are all in their mid-20s, trying to get their footing in a country and world shaped so much by 9/11. Some have joined the military or started their own businesses, while others have fallen on hard times.

They bore witness to the very moment a new American reality was born. They are the generation of Google, smart phones and Facebook, but also cyber-bullying, global terrorism, and climate change. All of them are African-American and Latino in a country that will be majority minority in less than 30 years. President Bush came to speak to them on 9/11 because they represented the future. They still do. It’s time to catch up.

This film is about the 9/11 Generation and the American Dream. It shines a light on a unique group of Americans, exploring their personal and professional lives, and giving voice to their hopes and fears. The 9/11 Kids provide a window into some of the most vital themes of the American experience. 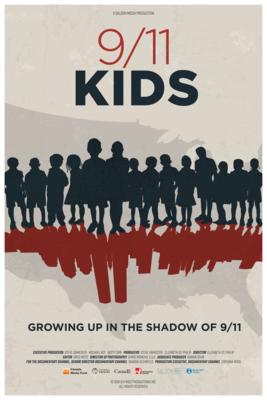