Akicita: The Battle of Standing Rock

Standing Rock was the spark that ignited the worldwide environmental movement that we know today, With the leaders of this movement- Bernie Sanders, Greta Thunberg, and AOC all giving credit to Standing Rock as the catalyst for the movement and also the inspiration for the Green New Deal. With the recently released AOC documentary ‘Knock Down the House’ and the upcoming ‘Greta vs Climate’ doc this is an amazing moment for the release of ‘Akicita’ shedding light on the real roots of the climate movement. All too often the people on the ground doing the real work are overshadowed by people with megaphones.

‘Akicita’ is the only Indigenous made film out of the Standing Rock occupation. The film shows the inner-workings of a movement never seen before on film. Serving as a blueprint on how non-violent direct action and the tactics utilized can cost the fossil fuel industry billions of dollars and, most importantly, spotlighting the Indigenous people who are at the forefront of every environmental battle, since their homelands are the most affected.

Going into the 2020 Election cycle, the only Native doc from Standing Rock shows Native Activists as the badass frontliners that they are, not the stereotypes you normally see in media. With over 12,000 people and 300 tribes united at its peak, Standing Rock was the largest Indigenous resistance in history…

Synopsis: Standing Rock, 2016: the largest Native American occupation since Wounded Knee, thousands of activists, environmentalists, and militarized police descend on the Dakota Access Pipeline, in a standoff between Big Oil and a new generation of native warriors. Embedded in the movement, native activist and filmmaker Cody Lucich chronicles the sweeping struggle in stunning clarity, as the forces battle through summer to bitter winter, capturing the spirit and havoc of an uprising. 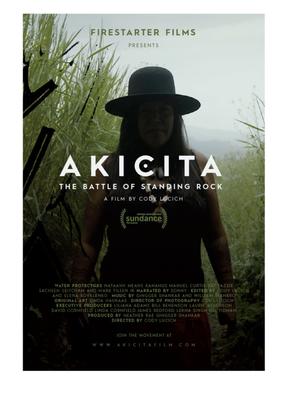 In Conversation with Wendie Malick